A downloadable game for Windows

It came from outer space. Not of it’s own accord, but more-so it was dragged here by a bunch of malevolent robots. The robots worship and bow to their ferocious flora as this is their means and their ticket to take over the world.

But, see here… though the robots have advanced technology and a murderous, brutish bloom in their corner, we have a small monkey… called Melvin. We did originally have two monkeys, but one of them was seized by the robots and taken hostage.

The plant – or “Trapper” as it is known locally – is, fortunately for the human race, feeling a little under the weather after it’s long journey and far too tired to deliver its payload of hot, toxic breath unto mankind. The robots must build up its strength by gathering delicious fruit and feeding it to their prized perennial in order to restore its former savagery.

If the Earth has any hope, Melvyn must counteract their actions by feeding the trapper on tin cans, fish bones and any other discarded rubbish he can find until any get-up-and-go it once had has got up and gone. At this point he can carefully lob any handy stick of fizzling dynamite into its hungry jaws and blow the darn thing back to whence it came.

Melvyn’s only defence against the marauding automatons themselves is a zappy, stick-like thingumajig which he happened to find near the alien craft. Armed with this device and a completely implausible plot he can knock over those robots, nick their fruit and kick them clean off our planet! Watch your step though Melvyn – there’s plenty more where that came from!

Based on an idea by Andy Green, who some may have heard of from his extensive pixel work on the ZX Spectrum,   Monkey Plant is a levels and ladders game in the finest  tradition of the 8-bit classics.

The idea is simple enough. Collect the various waste that lies around the screen and feed it to the Trapper to build up it's toxin level , then lob in something explosive and BOOM! - you're onto the next level.  Look out for the robots scurrying around the screen, they will help the plant by feeding it delicious fruit, but a quick zap with your zappy stick will cause it to drop anything it is carrying and flip over allowing you to kick it  right off the playfield.

Monkey Plant consists of 25 screens based over 5 areas, over 15 different types of enemy robot, 5 scary 'Boss' screens and a bonus round based on a classic arcade game.

Such a fresh fun game 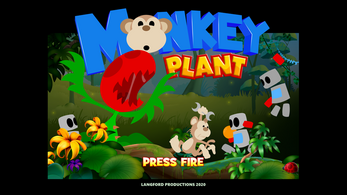 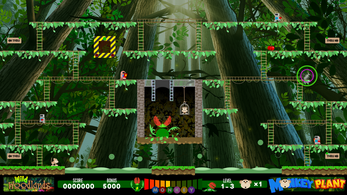 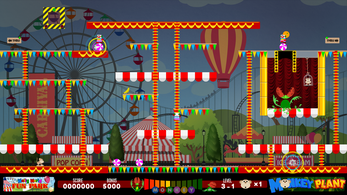